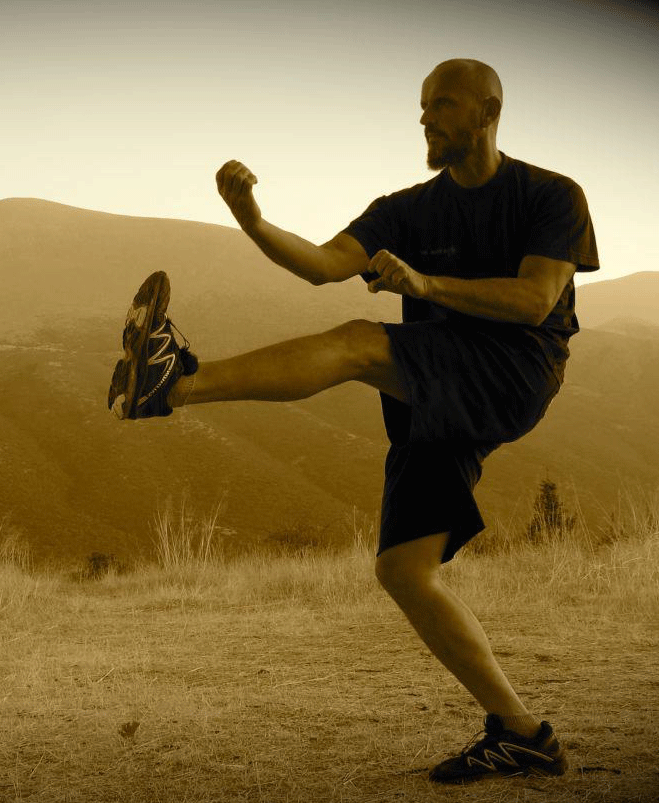 In 1996 he met Grandmaster Lily Lau. He learned from her, her family kung fu from 1996 till 11/01/2014. Shifu Lau was the one, who with her deep understanding of the art created the right basis and opened the door to the “real” Chinese kung fu. He was taught from her the 50 advanced techniques of Eagle Claw(Lian Huan Quan), the locking techniques (Qi Na), the art of weapons and the exercises for empowering energy (Qi Qong) of the system.
D.Doukas is the one who founded in 2003 the headquarters in Greece and spread Eagle Claw Kung Fu – Lau Fat Mang Lineage in Greece, teaching hundreds of students and almost all of the current teachers of the system. Together with his teacher Lily Lau he travelled many times in China where he took part in championships and came in contact with many other significant teachers. He visited in 2004 and 2006 the birthplace of Eagle Claw where he met many teachers of Eagle Claw and expanded his perspective on the system. He organized for many years seminars with Shifu Lau in Greece. Since 2014 the headquarters stopped functioning but Eagle Claw of Lau Fat Mang genealogy continues functioning from various clubs.

Dimitris Doukas in 1996, the same year that he met Shifu Lau, he began in parallel training in Chen style Taiji, with the Danish teachers Lars J.E. Larsen learning the “old form” Lao Tzia. In 1998 with the same teacher, he started practicing Yang style and particularly the 37 movements form by the Teacher Cheng Mang Ching, the 77 movements form (Chin Chien), Pushing Hands and the White Crane by the teacher Huang Sheng-Shyan. Shifu Lars, fine arts teacher in Denmark, studied for many years in China with different teachers, initially in Chen and later in Yang style Taiji. Luck drove him to the great teacher Huang Shen-Shyan, where he studied Taiji and the “secrets” of pushing hands from that famous teacher. The “western look” of Shifu Lars in internal Chinese Martial Arts(C.M.A.) was determinative in implementing in D. Douka the scientific view of those arts and determined his later quest in C.M.A. From 1998 until 2007 D. Doukas organized many seminars with shifu Lars in Greece. 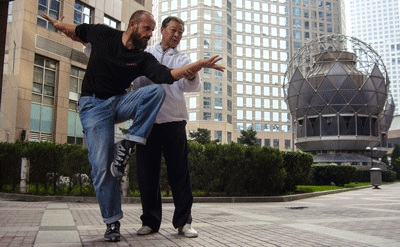 In 2006 in one of his journeys in China, luck drove him on the road of great internal arts master (Nei Jia Quan), Niu Sheng Xian.

Master Niu was a close student (Tudi) of one of the best teachers in China, grandmaster Li Tianzi. Master Niu was a champion in China in 1982 in Taiji and pushing hands and subsequently he was a trainer for ten years of the pushing hands team in China. With inexhaustible energy despite he was towards the end of the sixth decade of his life, he start teaching D. Douka the internal arts (Xing Yi – Tai Ji – Ba Gua – Wudang Jian) of his genealogy and soon their relationship sealed with the most official way.

Since 2010 he accepted him as his internal student (Tudi). That acceptance opened the door to a different and somehow exotic kind of Kung Fu, that of the Taoist meditation. The teacher’s father,  Niu Jinbao, belonged to the 1st Taoist generation of the Dragon’s Gate (Daojiao Longmen Pai) and the 1st Taoist generation of Qianfeng Xiantian Pai, so his oldest son, master Niu, studied from him Taoist alchemy. D. Doukas has organized seminars with master Niu in Greece and he is visiting him frequently in China, where he lives, practicing with him. Xing Yi and Bagua that we are practicing in, is the style of Hebei province and particularly the genealogy of the famous teacher Sun Lu Tang. Taiji that we are practicing in, is the Longfei’s (flying dragon was the nickname of Li Tianzi) Yang style Taiji.

In Wudang sword, we are practicing in the technique of the military general Li Jing Lin (Li the magic sword).

Dimitris Doukas came for the first time in contact with the art of Shuai Jiao through the teacher Lily Lau who taught him Ji Ben Gong, basic techniques and Shuai Jiao positions that he have learned through her uncle, the famous wrestler Chang Dong Sheng in Taiwan. Eagle style comprises in its material many overthrow techniques and this is natural since from one side all the great teachers of Eagle knew or have been in contact with Chinese wrestling and from the other Shuai Jiao has influenced all the known Chinese Wushu styles.

D. Doukas started in  2008 in Beijing, training with the Chinese wrestling champion, teacher Liu Zu Cuang (student of Li Bao Ru) in Shuai Jiao. That contact gave a deeper and more analytic understanding of the existing techniques and triggered a more intense occupation with the art of Shuai Jiao. The training method of Shuai Jiao is by far the best in achieving strength from the whole body and also for its application with an opponent. Since 2013 he started the organization of seminars in yearly basis for spreading the Chinese wrestling.The same year, together with his student shifu Divanis George and the Eagle claw teacher Master Dervendi Panayioti founded the Panhellenic Shuai Jiao Union.

During his visit in China he also learned:
Tai Yi from the Taoist monk Chen Li Sheng, in  2006 on Wudang Mountain.

Tang Lang Da Mo gien  and Tang Lang Ba Xian Gien from the master Song Chang Ji, in 2006 and 2009 in Qingdao of Shandong province.
The 64  Bagua hands by Liu De Kuan from the Teacher Zhang Wei Dong, in 2008 in Beijing.

Since 1998 he is the technical supervisor of A.C. Kerameikos. He took part as an athlete at many traditional wushu championships in China.
He participated with the National traditional wushu team:
1st World Festival of Traditional Wushu (2004, Ghengzhou, China) and took the 4th place in the Long Lance.
2nd World Championship in Traditional Wushu (2006) in 3 categories and took one place 1st (sword), one 2nd (premeditated battle) and one 4th (great broadsword).
3rd (Wudang 2008) and 5th (Hengsahan 2012) in the World Championship in Traditional Wushu, he accompanied the mission as a trainer of the national team.
He has a diploma of national judge in Taolu and Sanda from the Greek Wushu Kung Fu Federation (G.W.K.F.F.).
He has been a member of the Technical Committee, responsible for the traditional Taolu (2003-2005).
Cashier of the G.W.K.F.F.
Member of the Board of Directors of the new administrative of G.W.K.F.F., that was elected in January 2006 and member of the Technical Committee of the Federation from January 2006 till November 2008.
Trainer of the demonstration team of G.W.K.F.F. in 2006.
Trainer of the Shuai Jiao Greek team that took place in Rome in 2014 and in China in 2015.
He holds a Wushu B’ category trainer diploma and license to practice Wushu training.
He is the president of the Greek Shuai Jiao Union.
In 2014 he was an instructor at the school for trainers run by the G.W.K.F.F. and taught “internal fist”.
As a member of the Technical Committee of G.W.K.F.F. he was responsible for organizing and conducting many Panhellenic Championships.
He holds a Tuina diploma (Chinese therapeutic art) that he was awarded with by attending classes of the doctor Gianni Ferouka in Natural Health Science (2002-2003).

Ioanna Toumbakari was born in Athens in 1980. She graduated with honors from the State School of Orchestral Art in 2001. She continued her studies in England at London Contemporary Dance School, from where she holds a master degree in modern dance. Returning back to Athens in 2002 she started cooperating as a dancer with modern dance groups in performances both in Athens and abroad (National Theatre, K.T.B.E., Athens Festival, International Festival in Kalamata). She teaches modern dance in both amateur and professional dancers.
Since 2004 till today she is getting training in the traditional Wushu (Kung Fu) with the teacher Douka Dimitri in the Athletic Club Kerameikos.

Specifically, she is getting   training in the traditional styles Eagle Claw, Xing Yi Quan, Taiji Quan, Bagua Quan and Shuai Jiao. She has attended seminars with Grandmaster Lily Lau in Eagle Claw, with Niu Sheng Xian in the internal fist and Liu Zu Guang in Chinese Wrestling.

In 2014 in the World Championship in Chinese Wrestling, that took place in Rome, she won the silver medal in -56 kilos.

In 2015 in the World Championship in Chinese Wrestling that took place in Wenzhou province in China, she won the 5th place in -56 kilos.
She holds a judge’s diploma C’, in Taolu from the G.W.K.F.F.
She has attended a seminar for arbitration in SANDA, seminar for SANDA trainers (1st to 5th level) and a seminar for sports injuries.
All above sponsored by the G.W.K.F.F.